RIMPA Live 2019 was held at the Marvel Stadium in Melbourne, marking 50 years of RIMPA and its 35th Annual Conference.  It was a conference filled with a keynotes, plenary sessions and roundtables over the three days of the conference.  There were several keynotes including CTO and entrepreneur Gus Balbontin, Richard Foy, New Zealand’s Chief Archivist, information thought-leader Randy Kuhn Esq from the US and Kevin Sheedy AO, AFL Legend.

The first fifty years of RIMPA

The conference kicked off with David Moldrich Life FRIM outlining the history of the Australian recordkeeping profession and some of the key moments in the professions’ history such as the establishment of the Records Management Association of Australia (RMAA now RIMPA) and the development and implementation computer-aided records management systems and their successors the Electronic Document and Records Management System or EDRMS.

David highlighted the contribution of the Australian recordkeeping profession to the state of recordkeeping around the world mainly via the development of the first standard on records management AS4390, which later became the foundation for ISO15489, and through the development of the Records Continuum model.  These standards and models influenced the role of best practice records management across the globe, including in countries like France where new vocabulary was added to the language as previously there was no word in French for ‘record’ only ‘archive’.

While the Australian recordkeeping profession were still world leaders in this field, David noted that countries like Canada, Germany, the Netherlands and France have now moved ahead of us and we have some catching up to do in the 21st century to continue maintain our world leadership in this field.

Former CTO of Lonely Planet and Entrepreneur in Residence and Executive Director of VU Innovations at Victoria University, Gus Balbontin, gave an entertaining and lively presentation with the key theme of adaptability at its core.  He highlighted that it was people that needed to be adaptable, as the culture of businesses are the sum of the people in them.  He highlighted that in the same way as businesses, if the recordkeeping profession are the sum of its practitioners, we need to be adaptable going forward to drive innovation and change for the profession and the businesses that communities and constituencies we serve.

One of the most interesting points that he made was that he always asked vendors for an ex-implementation plan as part of implementing a product.  Technology is changing rapidly and it will inevitably be replaced at some point and in a fast paced business environment you need to do that quickly.  He also cautioned about setting this in concrete and becoming slaves to the system once you have worked out the ideal process that is proven to work.  These still need to be able to adapt and change but retain the good elements that they contained over new technologies or contexts.

Power of records and physical documents

The power and importance of records was and the recordkeeping professional’s role in being a curator of trusted digital content in this digital age were the two key themes that emerged from a panel discussion moderated by Chris Foley with NZ Chief Archivist Richard Foy and Justine Heazlewood, Director & Keeper of Public Records in Victoria.

In this world of algorithms and consumer expectations about having content surfaced to them, both Richard and Justine highlighted the role for records managers and archivists in being curators of trustworthy content in this post-truth era.  While they noted that all truth is subjective, including the truth in the historical and current records we keep and preserve, Richard and Justine expressed a view that there was a role to play for the recordkeeping professions in promoting better informed/evidence based decision making and promoting a culture of questioning where there is no evidence for a particular view.  In their view promoting that kind of culture leads to a better informed citizenry overall and that can only be a good thing.

Justine and Richard also emphasised that although the future is digital, the power of physical documents will remain.  This is most evident with key foundation documents, such as, the NZ Declaration of Independence and the Treaty of Waitangi as well as more mundane documents written by your own ancestors.  Justine recounted how she had literally seen researchers in the reading room moved to tears by simply holding something written by their ancestor.  Richard noted that while these documents like the Treaty of Waitangi help us construct a view of the past, they also help bring the past and the present together and help build the future.

Richard Foy provided a timely reflection of the role and importance of records, access to information and government accountability in the current context about information in the public arena and current discussion around misinformation, truth and trust in government and public institutions. 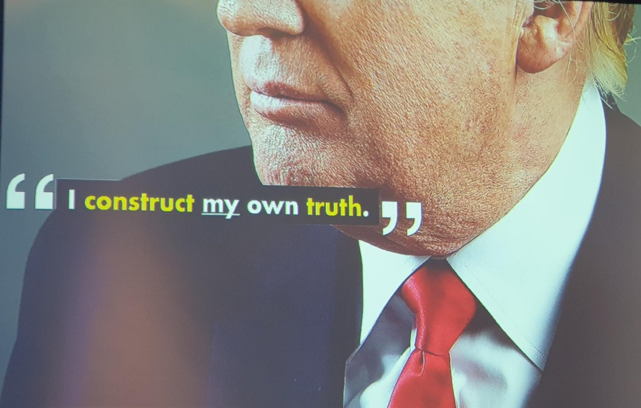 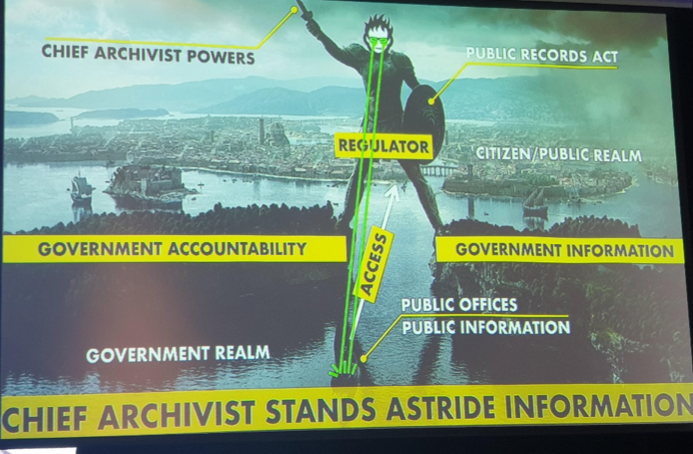 He also highlighted that role of the conscience of Government via the accountability officers which in New Zealand are – the Chief Archivist, Privacy Commissioner, Chief Ombudsman, Auditor-General and Chief Censor.  He also likened the role of archivists, recordkeeping professionals and information management professionals to the Night’s Watch as shown in the photo below. 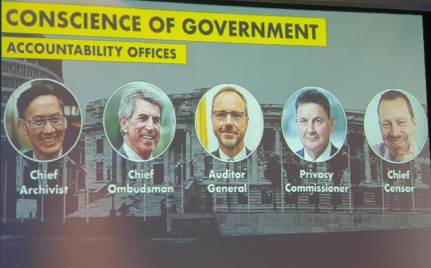 Kevin Sheedy’s key note on leadership was of particular interest as his career development started as a football playing plumber, but after his stellar and record breaking career (winning 3 premierships) and coaching career (winning 4 premierships), he went on to write 10 books between the ages of 50-60.  Although he didn’t see himself being a writer he cautioned that you should ‘never restrict yourself on what you can do - you only have one life’. Some of his tips included: make time to think and be creative – he recounted how he came up with the ideas of the ANZAC Day, County and Dreamtime in the G matches.

Kevin also spoke about the role of leading when persevering against those that are negative and ‘listening with your eyes’.   He recounted examples of those that were unsupportive of his goal to increase indigenous players to take up AFL and increase the number of professional indigenous players.  His commitment and energy to continual learning as an important part of ‘accumulating knowledge’ as a leader is evident in the life he has led, and also when he said in passing he always takes copious notes when he attends conferences! 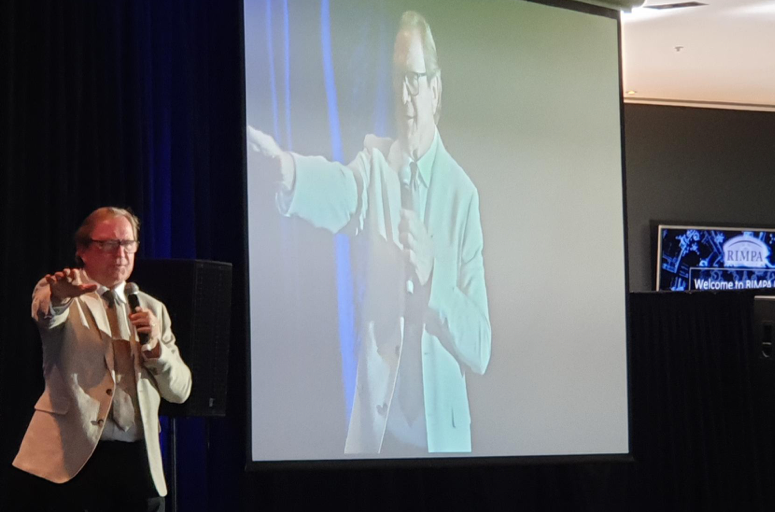 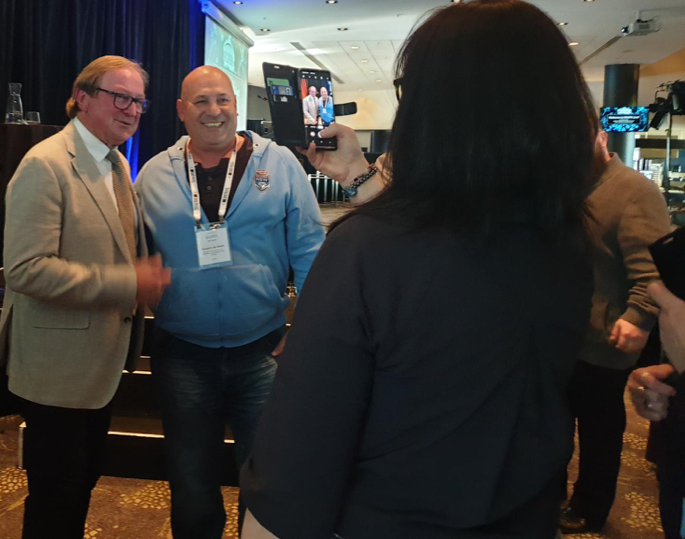 Chris spoke about the National Archives requirements for an Information Governance framework as part of Digital 2020 and the role of the CIGO.  Susan used the film Hidden Figures to highlight IG leadership lessons in times of organisational urgency, rapid technological changes and disruption as inspiration for those in areas of Information Governance including: upgrading both your skills and the skills of your team; working across organisational silos collaboratively; taking risks and stepping up to take on new roles and help solve organisational problems with new innovative solutions and best practice; and building the skills of your team to deliver value.  The IG leadership capabilities include the ability to:

One of the highlights of RIMPA 2019 was the Gala Dinner attended by 368 people.  Many worthy recipients were recognised for their outstanding contribution.  The highlight of the evening was hearing from the inaugural Hall of Fame recipient, Mr Tom Lovett who 50 years ago, at the age of 30, founded the Records Management Association of Australia (RMAA) which is now RIMPA.  As Tom recounted, he decided to establish RMAA because he saw a need to for a professional association to provide support and training for Records and Information Managers.  However, when he started RMAA he never thought it would lead to the ‘sea of faces’ before him at the Gala Dinner.  Tom recalled that as he went around to organisations and universities explaining there was a need for the tertiary courses that exist today there were many ‘scoffers’.  The advice he imparted was, ‘to find a need and fill it – you will never be short of work’.  He also said, ‘to bring your creative and innovative ideas’ to solve those needs.  Similar to the great Kevin Sheedy, Tom said, ‘there will always be scoffers – they are a dime a dozen – but ignore them’.  It was wonderful evening, celebrating the contributions of more senior professionals many of whom have over 30 years’ experience as well as some of the younger members for their outstanding contributions. 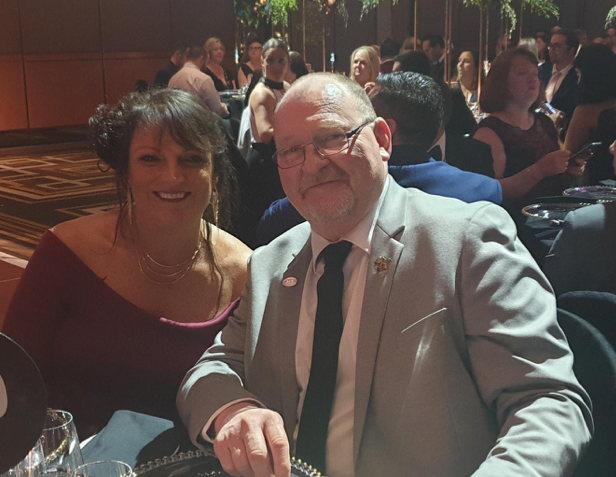 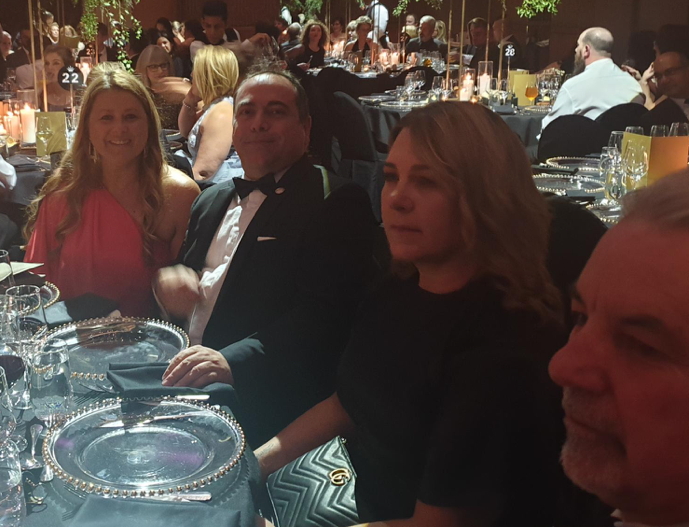 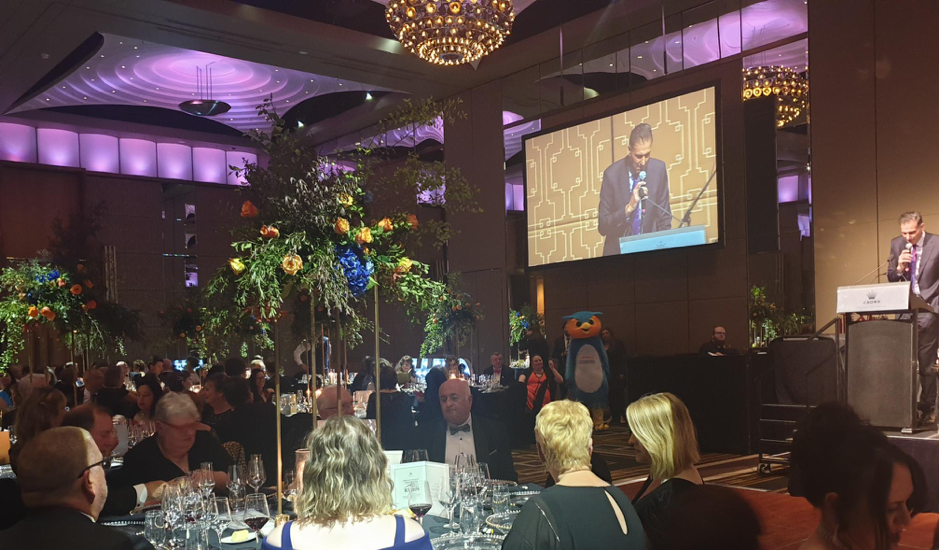 Congratulations to Anne Cornish, General Manager and her team for all the hard work and effort in making RIMPA Live 2019 such a success.  Information Governance ANZ was delighted to participate and we look forward to the 51st RIMPA conference in 2020, which will take place in Canberra.