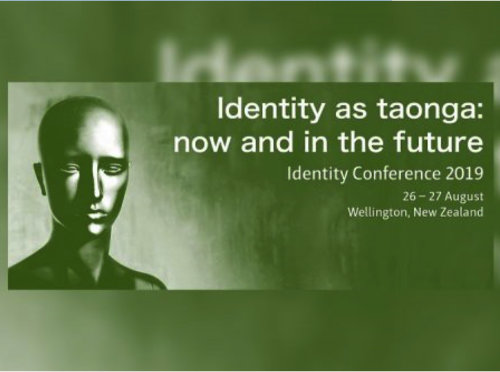 New Zealand’s Identity Conference 2019 was the fourth in a series of conferences that began in 2008.  The conference was held at the Museum of New Zealand Te Papa Tongarewa, Wellington, on 26 and 27 August 2019.  The conference purpose or ‘big idea is to look at the identity-related problems of today and the solutions of tomorrow’.  Carol Feurriegel recounts some of the highlights from the conference.

“Identity is a complex and sensitive area. It reflects our sense of self and it is also at the heart of relationships between people and organisations. Our Identity is our taonga” to quote Professor Steve Warburton, in his keynote address as Chair of the Identity Conference 2019 on Monday 26thAugust. It is fitting that the premier event that takes a multi-disciplinary perspective on Identity is held at Te Papa Tongawera, Museum of New Zealand in Wellington.

“Taonga” means ‘treasure’ in Te Reo Maori. It can be applied to anything that is prized, anything that is of value including socially and culturally valuable objects, resources, phenomena, ideas and concepts.

Identity is a concept that is honoured in Maori culture. It is customary when people meet to share your ‘pepeha’ or your introductory speech, based on your ‘whakapapa’ your genealogy. To the Maori and to many other indigenous peoples, your identity is intrinsically linked to your relationships with both the land (whenua) and with people (tangata).

We are now living in an age where technology is often the substrate on which our identity is established, validated, used legitimately and sometimes manipulated, misrepresented and stolen outright. Huge amounts of data and information are generated and flow throughout the digital economy and we need our identity in order to benefit from the many services and products that are available online, to earn a living and even to have a social life.

Identity has become what we say, what other people say about us and now in the age of the Internet of Things, our identity also includes whatever interactions we have in the cyber-physical world with technology.

These were the challenges and issues that were addressed by the expert speakers at the Identity Conference who ranged from Digital Services Minister, Kris Faafoi who deftly dealt with a tricky and anonymous sli.do question by peering into the auditorium and asking the enquirer to stand up and elaborate – which he promptly did! Proving to everyone that communication and clarity is sometimes better face-to-face.

To the New Zealand Privacy Commissioner, John Edwards who spoke eloquently about the emergence of ‘Identity politics’ and its links to the fear that drives groups to try and control the identity of others. He urged us to remember “Who I am does not take away from who you are or could be”.The Commissioner also had a shopping list of things for preserving dignity and autonomy in the face of digital encroachment including more regulation, ‘spanning, for example: antitrust consumer rights anti-competitive practices privacy, electoral integrity.’

A response on a global scale is required.  Looking at the Christchurch Call for Action, the Commissioner said, ‘one need that became evidence was an industry clearinghouse of some kind for identifying content that we can all agree ought not to be available.  You can find the transcript of the Privacy Commissioner’s address here. 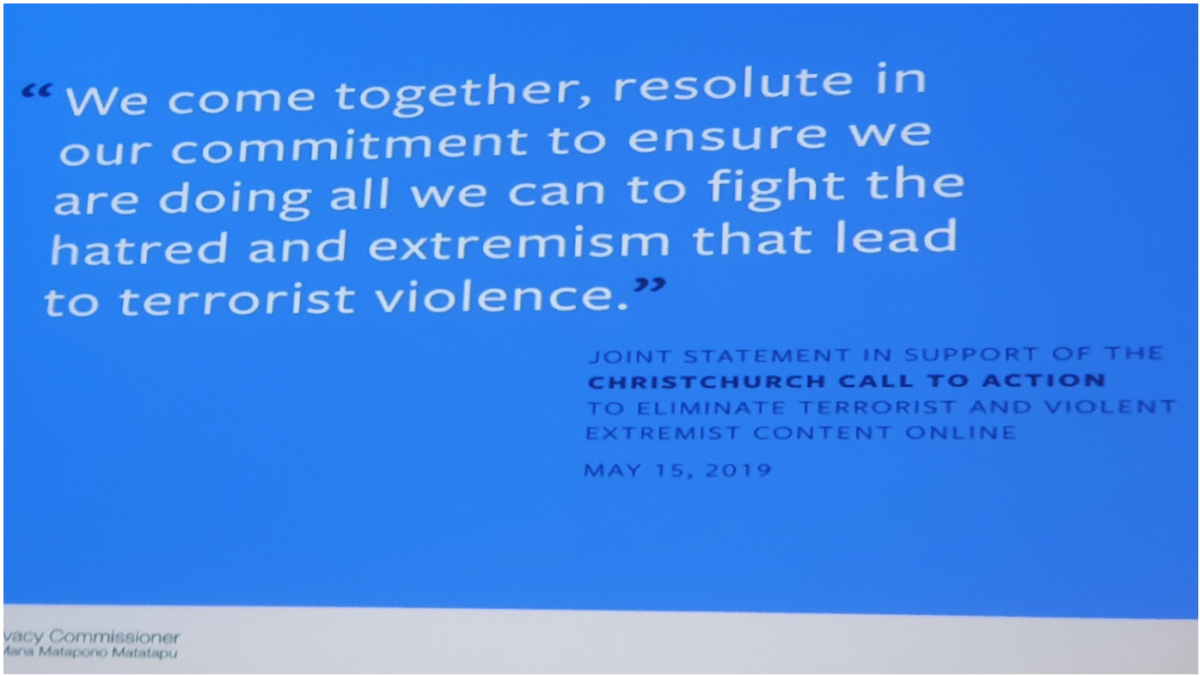 To academics like Professor Tahu Kukatai, an expert on indigenous data sovereignty who spoke about the Maori concept of ‘tikanga’, an ethical governance approach. Noting that governance regimes like the EU’s General Data Protection Regulation (GDPR) is individualized and doesn’t speak to the group rights and interests (whakapapa) identified by indigenous peoples. Nor does western governance embrace other indigenous concepts such as non-human identity, the identity of place which has a spiritual dimension for indigenous people recognising the interconnected relationships between people and places.

Other speakers included Kashmir Hill, a technology journalistworking for services like the New York Times and Gizmodo. Kashmir described two of her recent research articles. The first on the Internet of Things was called “The House that Spied on me”. 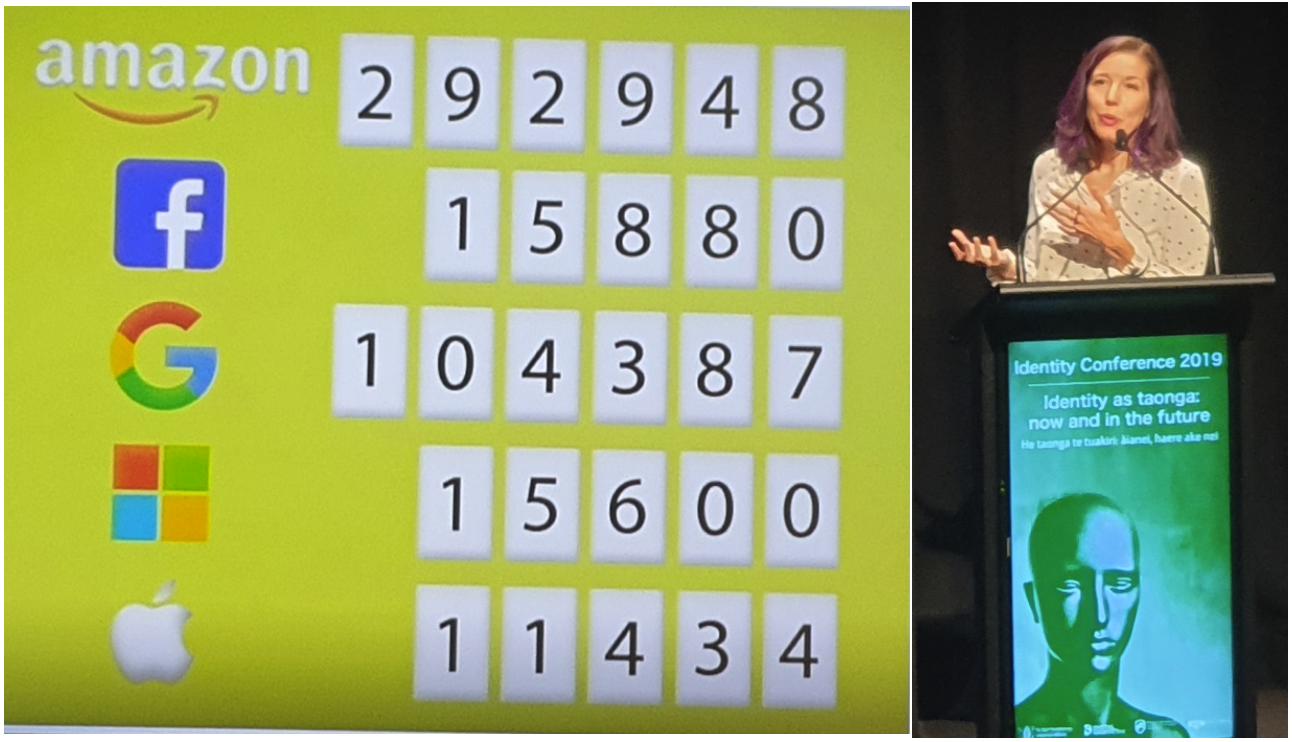 To prepare for this article Kashmir spoke about filling her house with every internet-enabled device she could obtain, from the commonplace Smart TVs and digital assistants, to the less common internet-enabled bed, toaster, fridge and dishwasher. She also found (but didn’t purchase!) more unusual gadgets like internet-enabled sex toys which being blue-tooth controlled, are apparently designed for ‘remote’ relationships. Kashmir collaborated with a technologist who created a special router for her home to harvest all the data traffic plus identify what data could be sold to data brokers. Her analysis of the data traffic was very revealing and also very disturbing for her and her young family.

Kashmir found that every single internet-enabled device in her home was sending data to its manufacturers even when they were not in use.

The Smart TV sends data to data brokers on viewing preferences, the fridge and other kitchen devices captured and sent data on temperature, usage and performance and the digital assistants sent a constant stream of ambient information to their networks.

None of the data traffic was visible to the users in the household and it reinforced the message that with the Internet of Things – even if you pay for the device you are still the product. 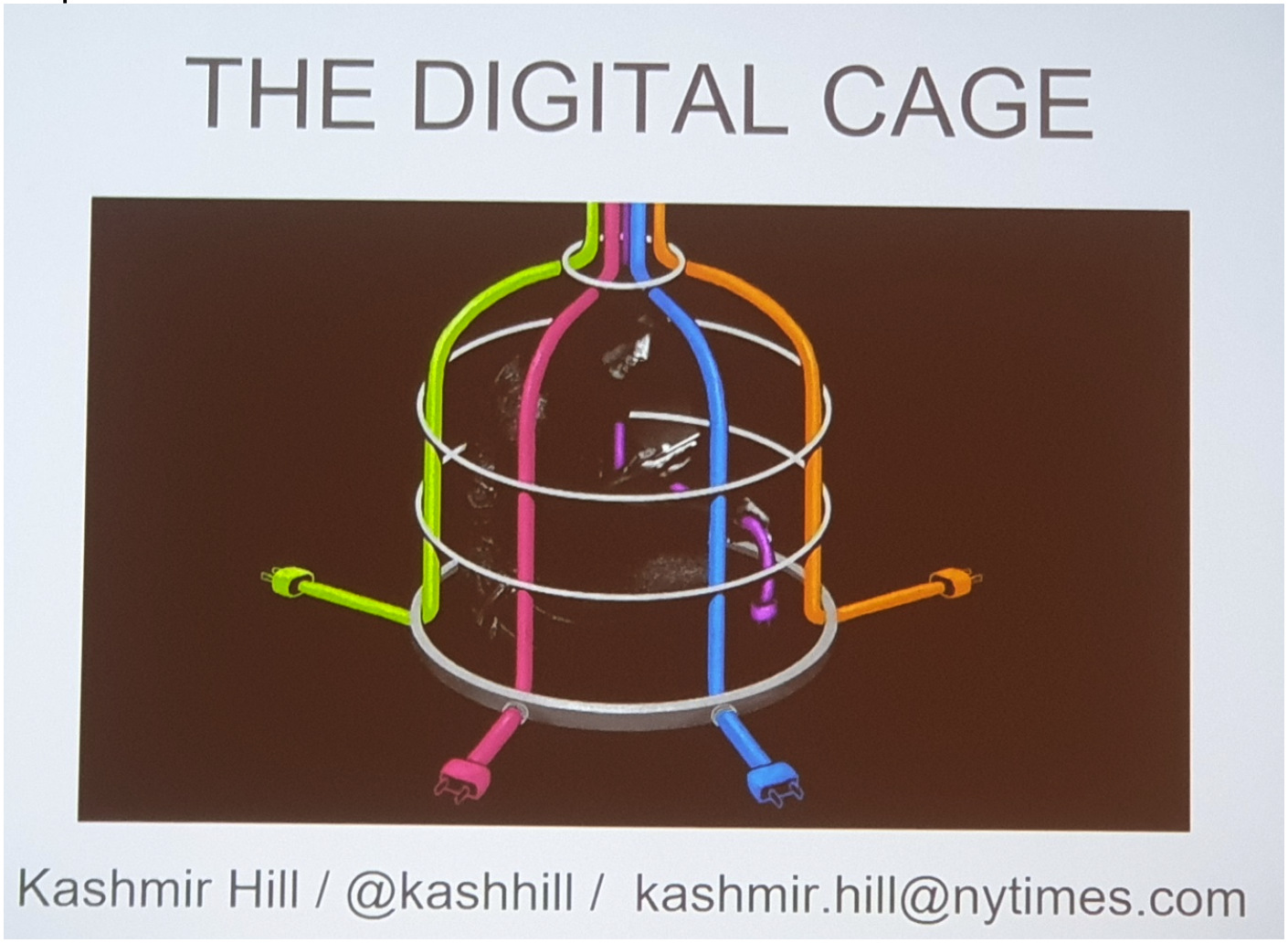 Kashmir’s second article she talked about was her experience of ‘Blocking the Big 5’. This was her attempt to divorce herself from the Big 5 technology giants – Amazon, Facebook, Apple, Microsoft and Google. To do this she collaborated with another technologist to build the equivalent of an internet ‘Faraday cage’ – a special router to block the published IP address ranges of the Big 5. Her results were fascinating.

She found Amazon the hardest to get away from – 30% of websites no longer worked as many other applications and services use AWS (Amazon Web Services) as part of their service architecture including Netflix, EBay and CNN. Kashmir’s experience was, ‘Amazon is so dominant that it quickly became clearly that it was impossible to avoid, in both the real and digital worlds’.

Facebook wasn’t as bad as Amazon, but it meant that Facebook-owned applications like What’sApp and Instagram ceased to work. She found that many conversations had moved into the digital world almost exclusively. During the research she missed important events in her social circle including the death of friend’s spouse which caused great embarrassment.

Facebook owns your social network data and social isolation is the result of severing the connection – without friends you don’t have a social network.

With Apple, contacts became the biggest issue. Apple is like a gated community and your AppleID is the key – when you were inside you became part of the conversation but once you were outside it became very difficult to participate or to get you data out – exporting your list of contacts to a non-Apple device was particularly difficult.

Kashmir found Microsoft can’t actually be blocked in the real world and that it wasn’t just the affiliated apps like Linkedin and Skype that stopped working. It was also car navigation systems and many point of sale (POS) applications which are powered by Microsoft products.

With Google, identity became flashpoint. It was easy to replace Google for things like search and calendars, but it became much harder when it came to mapsbecause many other services like Yelp, Uber and Lyft use Google in the background. However, many other services also use Google for identity verification and validation including Dropbox who wouldn’t believe she was a human being – because she couldn’t be verified as legitimate traffic (not a bot) via Google. The implication being that you aren’t a person unless Google says so.

The internet also became slower when she cut the Big 5 out of her life. Not only because other sites load assets like fonts, trackers, analytics etc. from Google but in general the internet is a much less pleasant experience without the benefit of the wealth of behavioral data the Big 5 have on you.

There were also a number of excellent panel discussions over the two days of the conference which covered topics including DNA and profiling, Self-sovereign Identity, Artificial Intelligence and Biometrics and more which were all valuable, informative and challenged the audiences thinking and perceptions around the changing role of identity and the value of truth, privacy, fairness and inclusiveness in our connected digital future.

The ever-entertaining NZ Chief Archivist, Richard Foy provided the closing key-note address on Public Records, Private Lives on the last day of the conference. Richard is a Te Reo-fluent kiwi of Asian descent and a huge Star Trek fan. Richard discussed the interesting questions of – Who am I? Who are we as a nation?   He entertained the audience with his recounting of the interesting, funny and sometimes unexpected facts he unearthed about his own identity when he tried to trace his family tree through the archival records in his care, including life under the Aliens Act 1948. 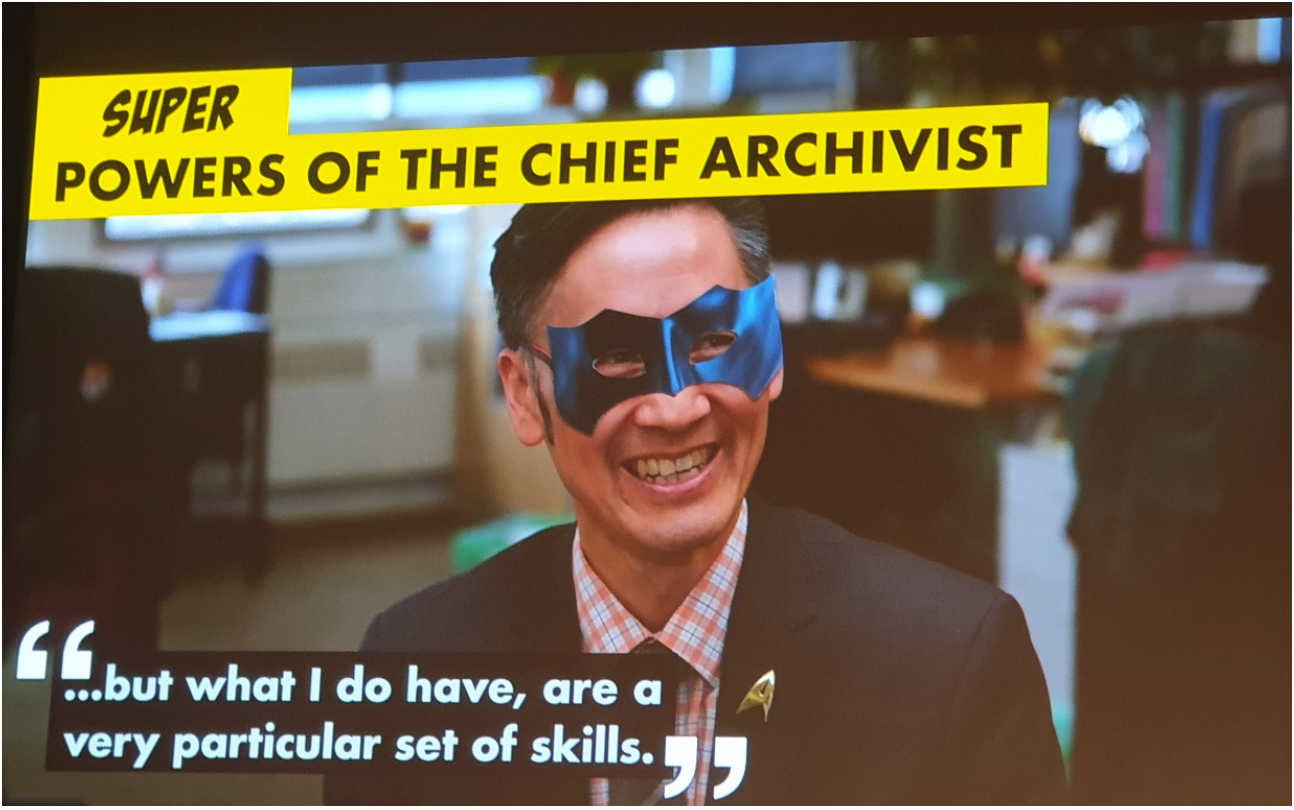 “Our national identity is captured in our memory and the stories we tell that define us. Identity is about making decisions about our future. It is our human right to define who we are and it’s about much more than just its expression in a set of credentials”.